Learn more about what your Gallery has to offer!

END_OF_DOCUMENT_TOKEN_TO_BE_REPLACED

No Art is an Island

END_OF_DOCUMENT_TOKEN_TO_BE_REPLACED

More Than Just a Drawing Class

Participants will draw Still Life, Portraits and Landscapes using a variety of drawing tools and materials on various surfaces.

END_OF_DOCUMENT_TOKEN_TO_BE_REPLACED

Gallery curator Terry Graff said the openings signal the beginning of a Renaissance period (pun intended) for the gallery.

“We’re really excited by where we are right now in terms of being the art gallery of New Brunswick and fulfilling that in a much stronger and bigger way,” Graff said. 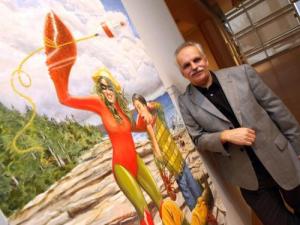 Terry Graff, the chief curator at the Beaverbrook Art Gallery, poses for a photo next to a Lobsterella by Peter Manchester as part of one of the latest exhibits, The Atlantic Art Collection: Image and Identity. The Exhibit ends June 5. The Daily Gleaner/James West Photo

A dispute over ownership of millions of dollars worth of art was resolved in September, and the gallery’s signature piece, Santiago El Grande by Salvador Dali, returned this month after an extended visit to a museum in Atlanta, Ga.

“Everything is moving on great. We have a lot of great things happening … a lot of things we haven’t revealed yet that are up and coming, in terms of our programming and our overall direction.